Disney in Missouri, and the glory of Road Tripping

Besides driving to Disneyland and Yellowstone, we haven’t done a ton of Road Tripping in our lives.  Long car rides=car sickness and 1,000,000 trips to the bathroom.  At least, that is what it meant to me until recently.  Now that my youngest is 10, and we have had several manageable trips to California, we decided we could brave a road trip.

And you know, it was pretty gosh darn fun.

Road trips should be flexible.  As you are driving, you should be able to see something bizarre or interesting off the side of the road and just stop to check it out.  You see a billboard for “World’s best home baked apple pie” so you go and eat it.  Or you see a sign that says “Home of the Corn Palace” and your curiosity overwhelms you so you have to know what a Corn Palace is, even though you have never thought to contemplate such a thing before.

That is the ideal road trip.

Unfortunately, due to a finite budget and limited time free of obligations, we did have to be a little more structured than that.  But we attempted a loose structure.  It worked pretty well.  We did get to see some unexpected things, planned for some “must-sees,” but still had to do that within a time frame.

As we were driving, my daughter remembered that Walt Disney was from a small town in Missouri.  My husband, who read a wonderful biography of Walt Disney last year, verified Disney’s provence from Marceline, MO.  So, I pulled out my handy dandy IPhone and found that Marceline was not only right on the way to our next destination, but that there is a small museum devoted to Walt.

We have mentioned that we are Disney fans, right?  Not Disney channel/marketing fans, but classic Disney fans.  I love Disney’s American Dream story.  He is one of my heroes.

Here is the biography we recommend:

It wasn’t difficult to find the Disney museum in Marceline because it was like stepping back in time.  The town is tiny and sleepy.  As we pulled up to the museum, we were greeted by two lovely ladies who were sitting out front.  We were the first customers of the day!  While we were there only one other family stopped by. 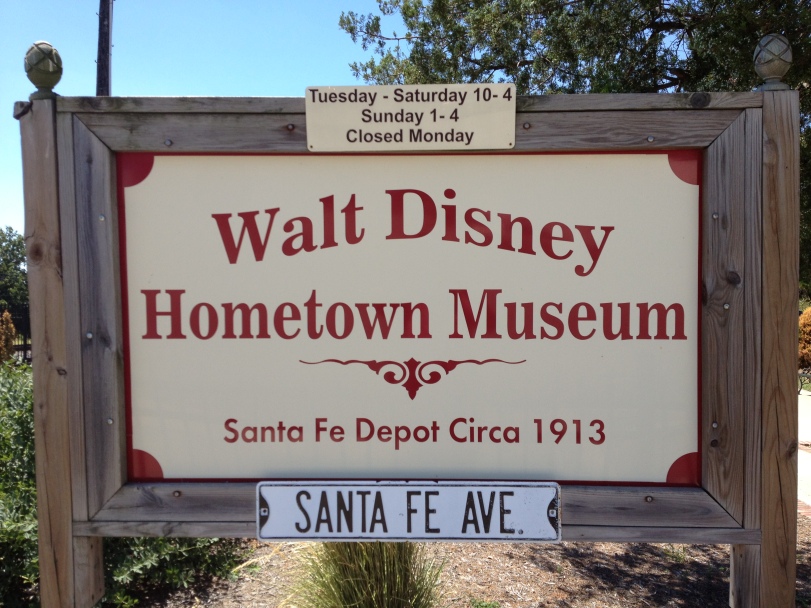 The museum is located in an old Railway Depot.  Trains still go by, about one every eleven minutes.

One of the many trains that passed the museum during our visit.

Our visit started with a short tour explaining how Marceline made an impact on Walt Disney throughout his life.  Our tour guide was the retired school secretary of the Elementary school, and had ties to the community all her life.  It was immediately evident how proud the town is of their prodigy.  Also endearing was how Walt Disney never forgot his roots and forever saved a special spot for Marceline in his heart.  When Walt’s sister died, she donated all of her personal effects to the museum, which makes up most of the collection.

Original Mickey Mouses that Walt gave to his parents.

The majority of the collection consists of letters and other papers, with a few fun items like Disney’s school desk (where he had naughtily carved the initials WD into the surface) and an original Autopia Car.

I loved these vintage guides to Disneyland: 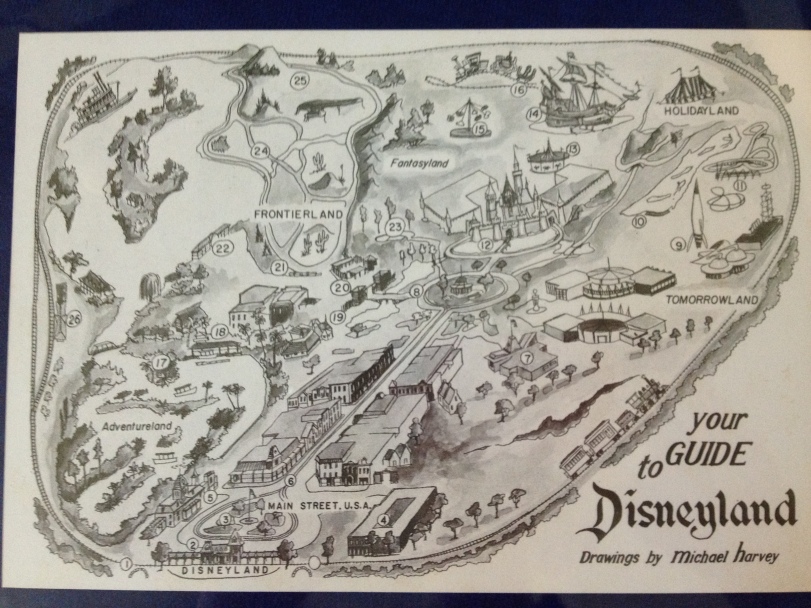 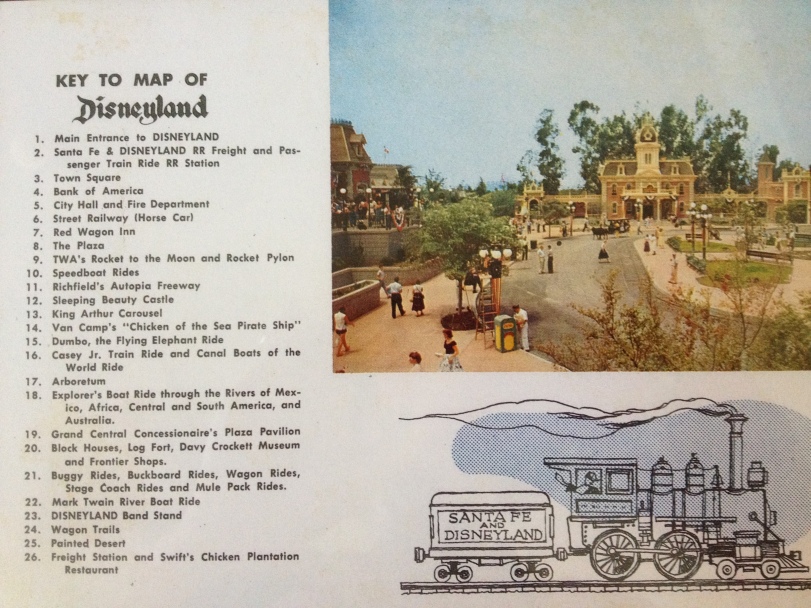 When Disney dismantled the Autopia ride in Disneyland, he send the entire ride to Marceline for the children of his hometown, and then came for the dedication ceremony.  The ride was shipped in pieces and then assembled on site.

A photograph of a photograph. This is a first and last time a Disneyland ride was assembled outside of the park.

The Midget Autopia ran for many years until it fell into disrepair and could no longer be fixed.

Over the years, Disney also sent funds to the elementary school and endowed a swimming pool for the town.  He felt so nostalgic about his hometown that he also started a project wherein he planned to create an amusement park based on the concept of small town living.  He was worried children were becoming disconnected from the roots of small town America.  His plans included greenspace with a fishing pond, animals, small rides, etc.  Unfortunately, Walt died before it could come to fruition.

Besides the museum, Walt’s stamp seems to appear everywhere in the town. Apparently, Marceline is the only place in the world outside of the Disney corporation who has permission to use the distinctive Disney script.

Main Street in Marceline is the original inspiration for Main Street USA in Disneyland, as well.  By looking up and down the street the connection is obvious. Even the street signs have mouse ears!

If you are ever in the area, and happen to be a Disney fan, this is a lovely little Road tripping kind of spot.  We were there for a couple of hours and learned a few new things about Disney.  I loved how proud this tiny town is of their darling, and Walt’s behavior towards the town was an example to me.  He wanted to preserve always in his life the sense of goodness and purpose he experienced by growing up in this tiny town. We shouldn’t ever forget our roots and heritage.

One thought on “Disney in Missouri, and the glory of Road Tripping”