Being the native California girl that I am, no visit to California seems complete without an afternoon at the beach.  Except if it is too cold.  But even then, I am usually up for a “stroll along the beach wearing your sweats” kind of afternoon.  The beaches where I grew up, in Northern California, are often pretty chilly.

Huntington Beach is our favorite beach to visit in Southern California.  The city of Huntington Beach is known for its 8 mile stretch of pristine coastline.  There are bathrooms where you can change, ample parking (expect to pay $15 to park–it is a Park), Lifeguard towers, and bike paths.   From the parking lot it is just a few feet until you hit sand and then it is just a short hike before you are right at the edge of the ocean.  There is so much space here that rarely have we felt the beach was too crowded, even on a weekend.  And lucky for us, this beach is only a 35-45 minute car ride from the Disneyland area.

This October weekend the beach provided us with an absolutely perfect afternoon.  Except for a set of lost keys, which are now on the bottom of the Pacific Ocean somewhere.  Along with my husband’s wedding ring from 10 years back.  Lesson: do not swim in the ocean with a pair of keys in your pocket.  Luckily, there was a set up duplicate keys with us in California.

The sun was shining, the air was clear, there was a slight breeze, and we got a fantastic wildlife show!  I don’t think visiting the beach can get better than that.

As we were sitting along the beach with our toes in the surf, we suddenly spotted a dorsal fin out in the distance.  My little travel buddy was sure his worst fears were concerned: he had never been to the beach before and was quite positive sharks were going to get him.  But then we saw a spray of water from a blowhole and figured out we were looking at a dolphin!  And then it was not just one dolphin, but an entire group of them!  They were breaking water fully and riding the waves.  I had never seen anything like it from the beach!  My husband was swimming out there and encountered a huge school of fish, and as we were watching from the beach, a dolphin appeared in a wave right next to my husband.  They were there hunting the school of fish as a pack.  I even saw several of the silvery  fish in the tops of the waves.  It was an absolutely spectacular show.  I wish I would have nabbed some pictures, but I was too entranced to even think about it!  I can’t believe we happened to be on the beach at the exact moment to see such a wonderful sight.  One of those amazing blessings!

Once my husband was done swimming about in the ocean, he came back to the beach and remembered to take some pictures.  After a while, we couldn’t see the dolphins anymore, but there were several pelicans circling and dive bombing over the school of fish.  One pelican flew right above our heads, only about 15 feet above us.  I couldn’t believe how huge it was!  They do not seem large from far away, but I bet the wingspan was close to 6 feet.

Here is a series of pelican pictures my husband took.  Dive bombing in action! 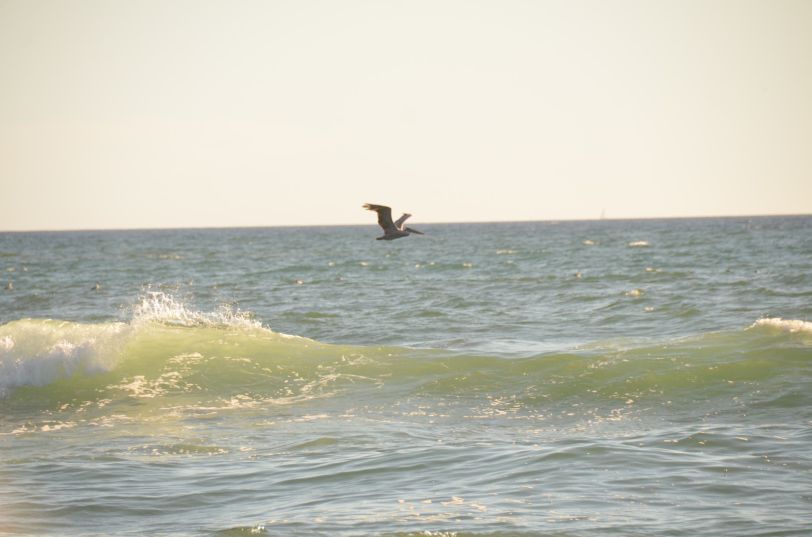 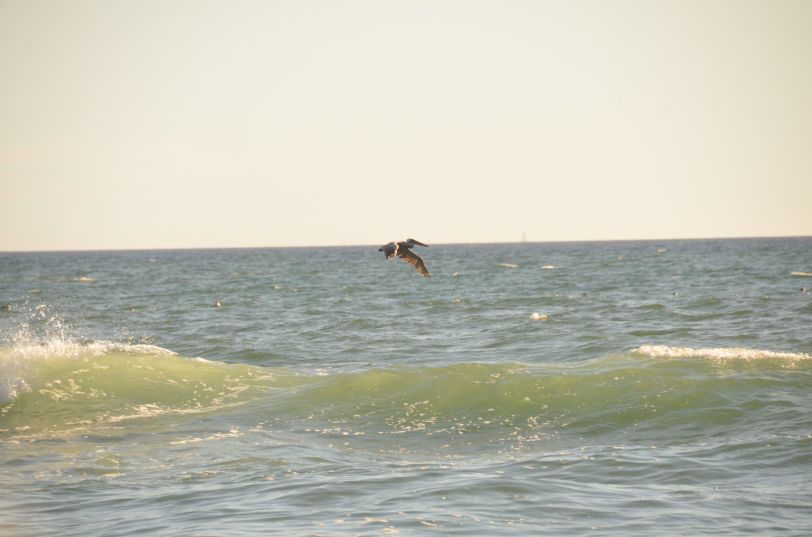 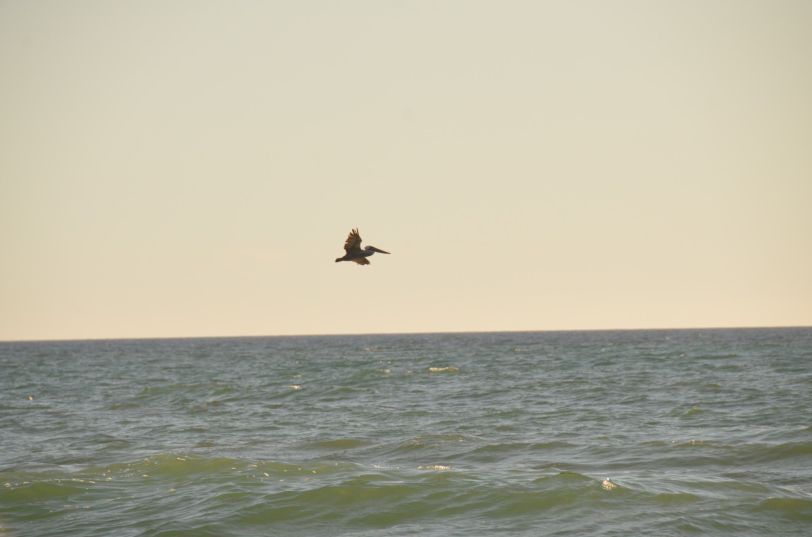 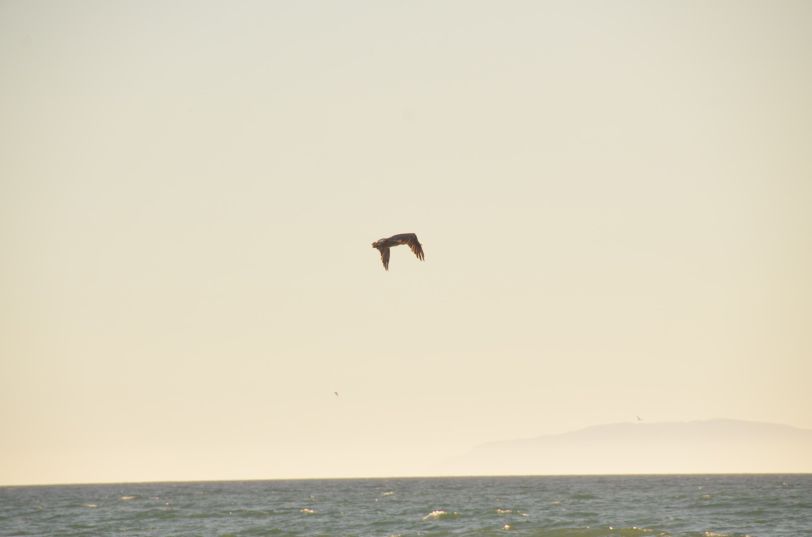 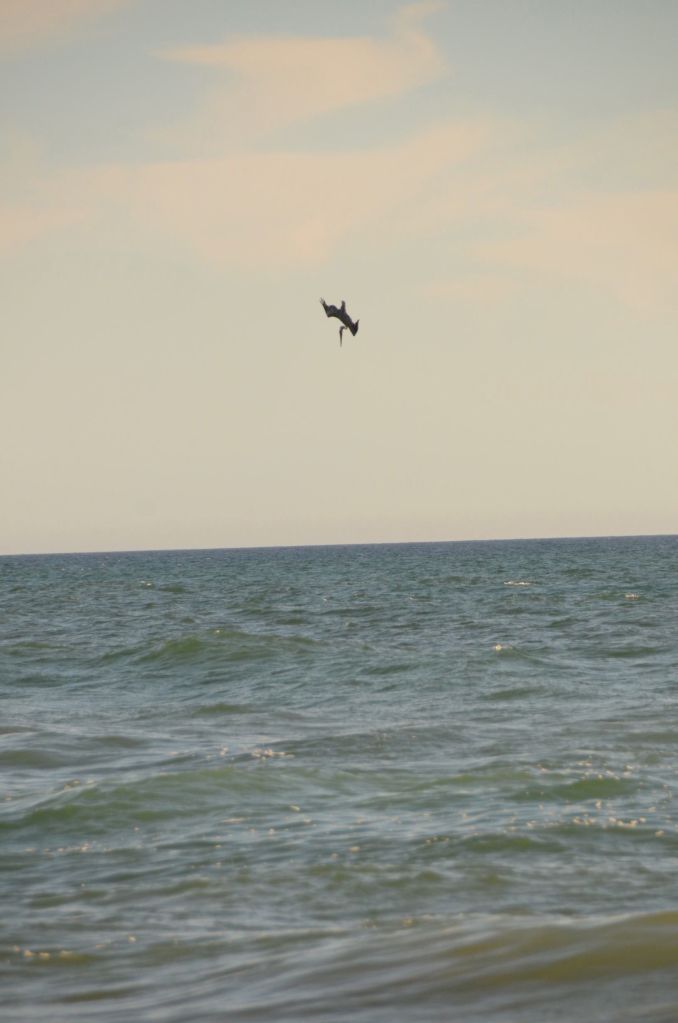 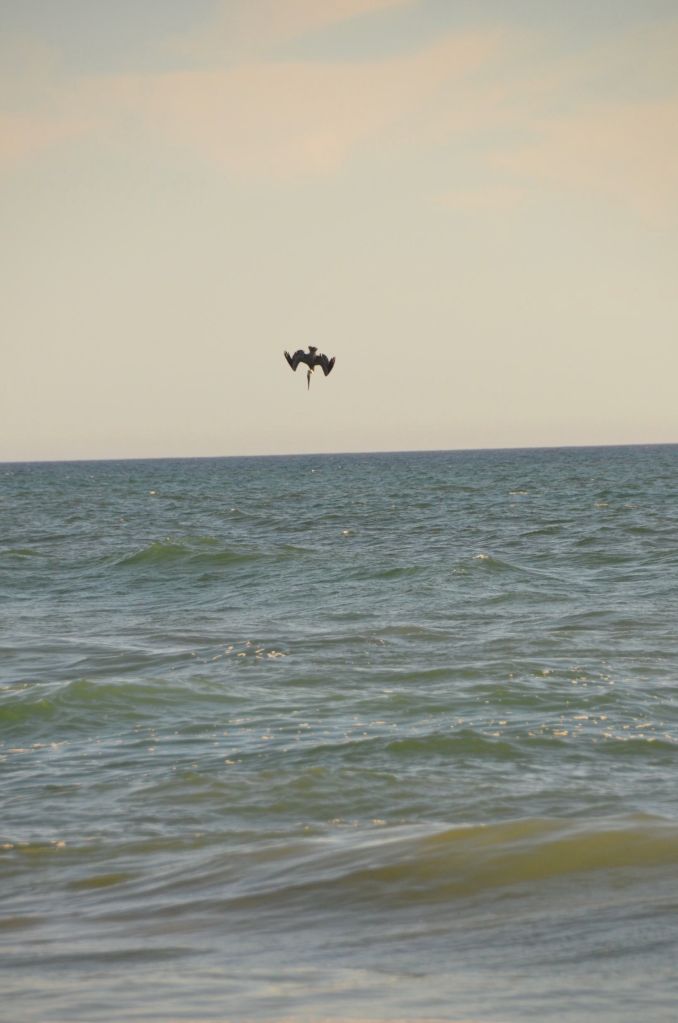 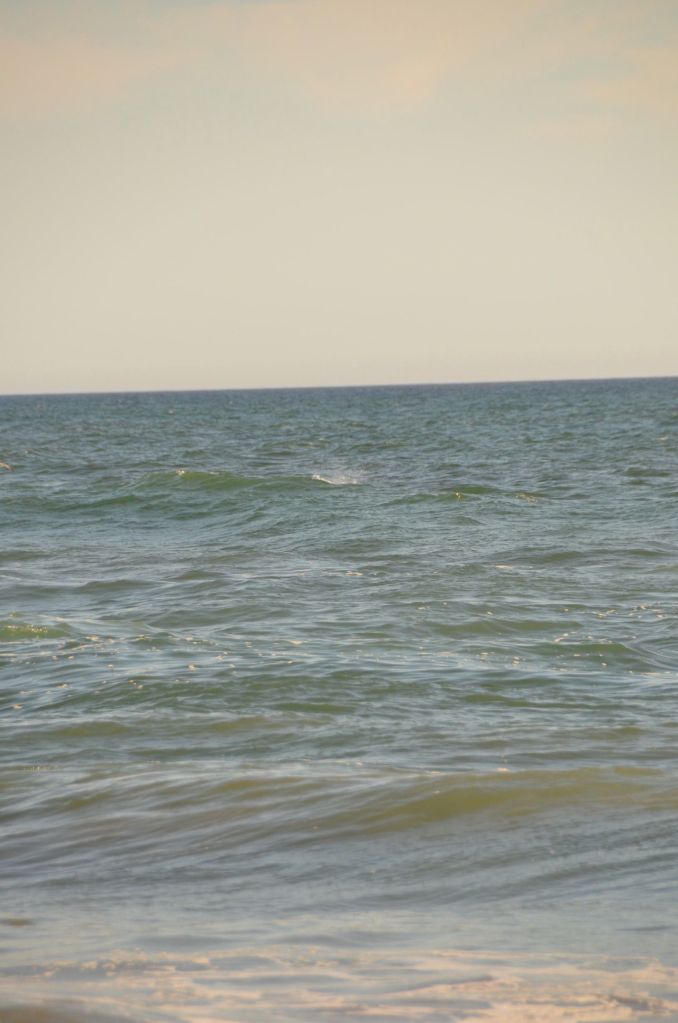 The guys all went to swim and ride the waves.  It always gives me a heart attack to see how far they swim out.  I was well indoctrinated about the danger of undertows as a young child.  I go in, but not very deep.  Plus it is cold.  What I like most is the sound and patterns the waves make as they hit the shore.  I like to dig for little crabs, and watch the sun move across the sky.  I always dig myself a little sand chair, and make myself comfortable.  From there I can watch the ocean. 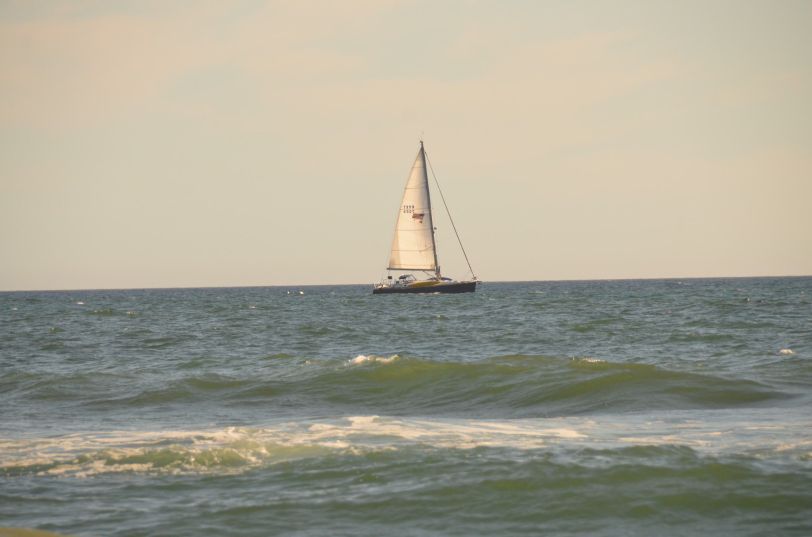 A sailboat made its way across the horizon 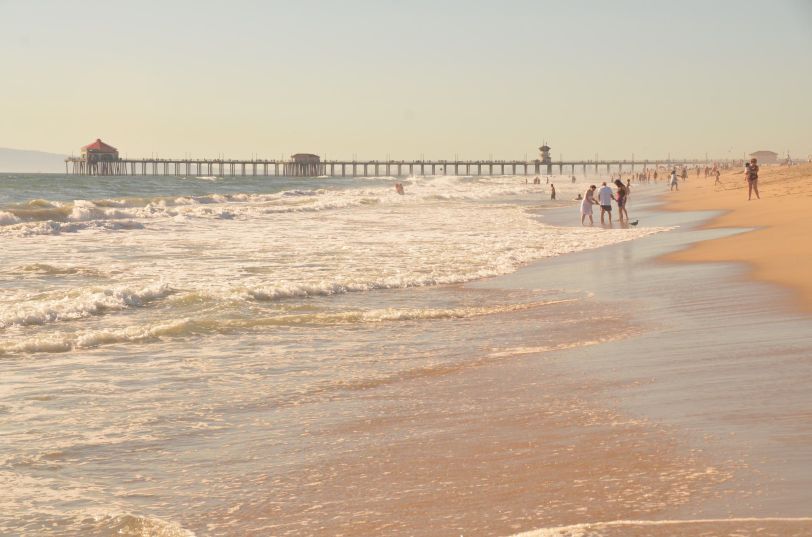 Of course, if you are little and have never been to the beach before, playing “catch me if you can” with the waves is the classic choice. 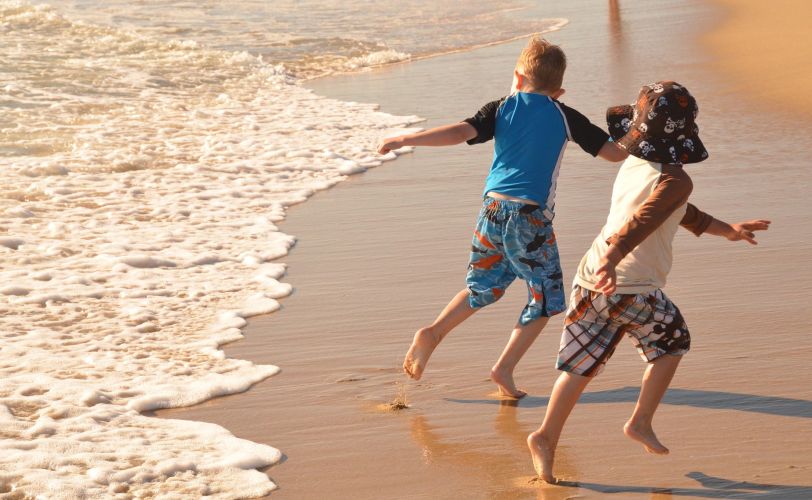 It's gonna get you!

I looked out my widow this morning and I am already missing the sand, surf, and sun.  It is cold and overcast today, and at 8 am it was so dark it felt it should have been night time still.  I love many things about where I live, but the long winter, which often goes from October to June, can be a bit overwhelming.

I am hoping I can get my Dr. to make me a travel prescription.  Honestly, it does wonders!  For the last several years our method of coping has been to visit warm climates, such as Hawaii or California, during the worse months of January and February.  Do you think I can get my insurance to pay for it?

2 thoughts on “Fun in the Sun: Huntington Beach, California”