My Food Experience in Athens 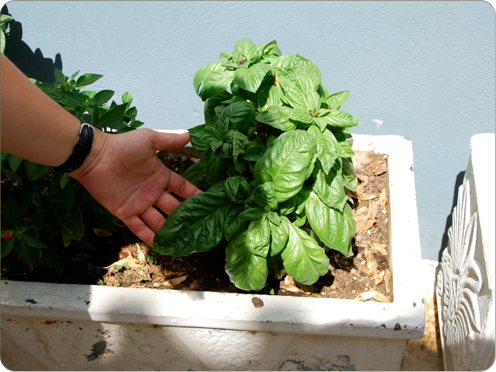 Look at the size of that Basil!  Wow!  I was totally impressed and made PapaChef stop and take a picture.  The leaves were as big as my hand!  Now I know why I can’t get Basil like that to grow.  It must love the Mediterranean climate, and if there is anything Idaho is not, it’s Mediterranean!  This basil was growing in a little box outside of a darling little apartment in Athens.

I have been blogging about Italy, and although I still have several more posts in mind, I thought I would divert for a minute and talk about food.  I love food.  So I love to talk about it.  And food plus travel…..well, it just can’t get any better.  Or worse, as the case may be.   So I am thinking back to our trip to Athens last year.

Since we spent our time in Athens at the Acropolis and the museums, we were mostly in a dense tourist area, with restaurants that catered to the tourist crowd.  They were still good, but I have had more gourmet and exquisitely prepared Greek food both in Salt Lake City and New York.  You couldn’t find much more on the menus than the typical Greek fare like Gyros, Souvlaki, and Moussaka.  One restaurant in particular, though, served traditional Greek food that was delicious, and seemed to be a cut above the other tourist spots.  We ordered Moussaka and dolmathes.  Moussaka is like a Greek Lasagna: layers of potato, tomato, meat (usually beef or lamb), and eggplant, béchamel sauce, and rich spices like cinnamon.  Good Moussaka is comfort food at its best.  Dolmathes are stuffed grape leaves.  The grape leaves are a bit pickled, or sour, and then the inside is full of rice, tomato, and meat.  For dessert we were served Greek style yogurt (super thick and creamy) drizzled with honey.

Right around the corner from our hotel was a tiny bakery.  They had a small display case that faced the street filled with pastries, which were completely different that Parisian pastries.  They are made with phyllo dough, which makes the crust light and airy.  The insides were filled with things like vegetables, ham, and different kinds of cheeses.  Both mornings we stopped here the pastries were hot, right out of the oven, and absolutely divine.  Right next to the bakery was a tiny kiosk where you could buy Greek yogurt.  I will admit that I am a yogurt connoisseur. I eat it every day if at all possible.  And not gross yogurt like Yoplait.  You have a bit of the real stuff and your taste for the standard grocery story variety evaporates.

There are also many little stands where you can buy a gyro to eat on the go.  Unlike the pressed lamb and beef that we have eaten in the states, all the gyros we had in Greece were chicken.  Go figure. Maybe lamb was not in season?  That was surprising to me.  But boy were they delicious, and cost just a couple of Euro!  After Paris, the prices in Athens seemed so cheap!  In the square there were fruit stands piled high with grapes, and it was there that I had quite possibly the most delicious green grapes I have ever had.  They also had stands with varieties a pastries that looked like large, soft pretzels covered with sesame seeds.  Inside the chewy exterior they were filled with chocolate or jam.

On one of our free evenings PapaChef and I decided to find a Greek SWEET pastry shop so we just went walking.  And surprisingly, we found one!   Again, it was fun to compare the pastries of Greece and Paris.  The Greek pastries are soaked in honey, with an emphasis on phyllo dough.  I love them both.  I could eat a pastry a day.  Thankfully, I can’t access really good pastry on a daily basis!  We ordered a cake that was soaked in honey, and a pastry filled with an eggy custard.  Both were amazing.

After being chastised in Paris, we asked for permission to take these pictures and the owners were happy to oblige. 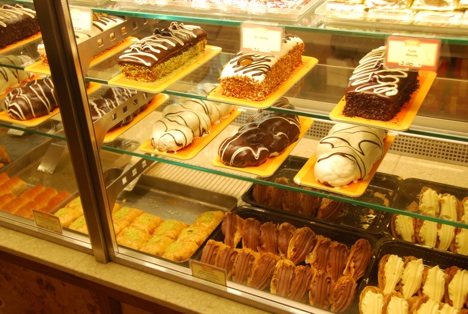 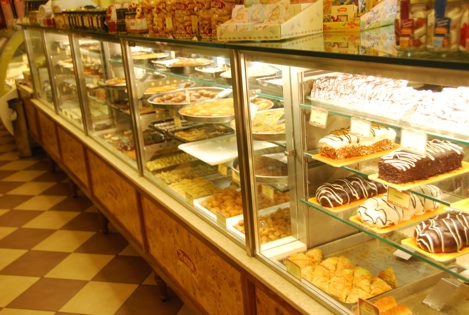 This delightful, upscale patisserie is called Chatzis, and is on Mitropoleos St., a block or two west of Syntagma square (where there is a significant Byzantine style church).

4 thoughts on “My Food Experience in Athens”