Venice: the city for Romantics

I read an article about Venice that suggested the most amazing thing about Venice was the city itself. I agree. The city is so unique and unusual. Walking across town was so fun. There is so much to look at. Each turn in the road is a new feast for the eyes.

For this trip our group parted ways. After Ravenna, Pop, Gwenn, Andrea, and Ellie went back to Tuscany. The rest of us went on to Padova for the night and then rode the train in to Venice early the next morning.

As usual, boarding the train is confusing and stressful. You buy tickets from a kiosk, and then you watch a huge digital board that tells you which platform to go to. Problem is, they don’t list your destination, they just list the end arrival point. And they don’t give you your platform assignment until moments before. Then when you get to the train half of the cars are sleepers or first class so it is ridiculous to try and find which car you can board, and the staff are minimally helpful at best. So once you are on the trains are fabulous. But I can see there is a learning curve before you really know what you are doing. Thankfully, Bryce is good at that kind of thing so he is the brains behind the operation.

Here is Matt and Jake on the train.

Once at the train station, we had to catch a ride into the heart of Venice. The only way to do that is by a water vehicle of some kind. There are water taxis and gondolas, but we went with the cheap way: vaporetto–water busses. They are jam packed full of people and quite an interesting experience. It has stops along the way just like a subway or bus route. Here are some of the sights just as you get on the water busses. 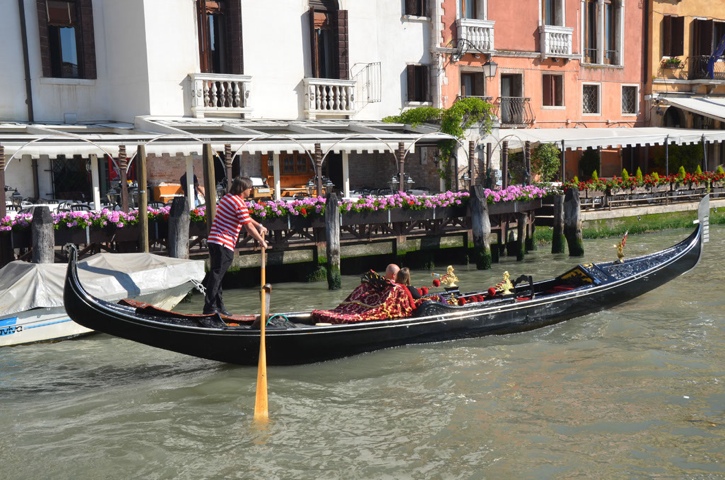 Our first stop was the Frari Church. We got there right when it opened so it was practically empty. This church is dedicated to the brothers of St. Francis and houses some treasures. Most famous is Titian’s Assumption of Mary (1518) which serves as the altarpiece. The glowing colors really stand out, as this church, true to it’s humble brothers, is more sparse than most churches in Italy. We were not allowed to take pictures inside any structure in Venice (argh) but here is an image I located.

Also in the Frari church is a beautiful painting by Giovanni Bellini. It is in one of the chapels in the right transept. I really love this one. Bellini was an innovator in oils in Venetian painting. Before Bellini most painting was done with Tempera, an egg based paint. Oils were more common in the northern countries, and it took a while for the idea to spread as far south as Italy. But boy, once it did, those Italians caught on fast! Venetian painters paint with soft edges and glowing colors. Overall the style is more gentle and sweet compared to what you see in Florence. And being an ocean town, the light and atmosphere is vastly different than Florence, and that in turn effects the way light is portrayed in the art. Here is the Bellini altarpiece:

Isn’t that exquisite? In this example you are seeing it out of context (dang….what is the harm in taking pictures with no flash???), but the architecture you see in the painting actually continues the architecture of the space. Awesome. In our Rick Steves book about Venice he said the gentleman on the right was Sean Connery. We giggled like naughty schoolchildren about that because it really does resemble him! Actually, this is what they call a “sacred conversation” in art. It shows the divine with the saints meeting together. We spent several minutes enjoying this lovely piece before moving on.

Our next location was Scuola San Rocco, and was just a very short walk from Frari church. This building was home to a Christian service club and houses twenty years of work by Venetian artist Jacopo Tintoretto. There are two main halls and some adjacent rooms that feature larger than life oils both on the walls and the ceilings. You don’t see Fresco very often in Venice, as the climate and especially the salt in the air is damaging. So on ceilings you see huge oils that were painted and then placed in the ceiling. Tintoretto’s work speaks loudly about his own style, which is typified by the use of extreme light and bodies in action. Again, no photos, but here is a shot of the upper gallery:

This was a lovely place to visit and only takes an hour or so. I think his “Annunciation” was my favorite. Notice how the angel has burst through and damaged the door! Not the quiet, contemplative scene you usually see.

We decided that we would walk from the Scuola over to St. Mark’s square, slowly, so we could window shop and find some lunch on the way. At least my plan was to walk slowly because I love to look at store windows. Mostly though, Bryce and Jake would wander ahead and then wait for me to catch up. Matthew was always on the hunt for something for his honey so sometimes he dawdled with me and sometimes he hung with the guys.

Walking is Venice is amazing! There are no cars, just narrow pedestrian streets lined with amazing shops. Every storefront is a piece of art in and of itself! Of course you get the regular assortment of tacky souvenir shops, but interspersed are artisan shops of all kinds. The famous item everyone wants from Venice is a paper mâché mask. You can find these in souvenir shops, which I would avoid, but you can also find the in mask shops where the shop makes the masks all in house. I couldn’t help myself. I succumbed and got one for my daughter, from a lovely little shop that makes all their own. Just check this out! 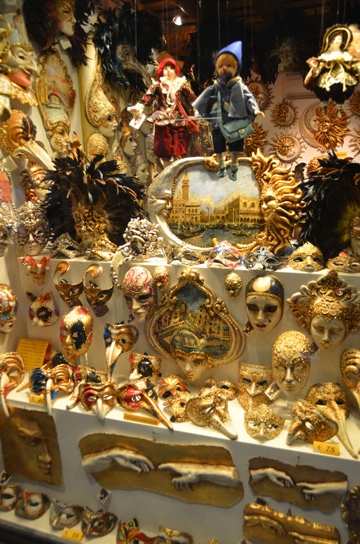 I hope you can understand why taking a walk in Venice is so distracting! Mask shops were abundant, as well as hand blown glass and jewelry shops, all competing for the most beautiful window. Here was a darling suit I made Bryce take a picture of.

We also passed an amazing open air market, filled with gourmet fruits and vegetables. I was coveting the white asparagus. But purchasing it in the middle of the day in a big city with no way to cook it just seemed silly.

As we hunted for a place to eat, it became apparent very quickly that Venice is quite a lot more expensive than the other cities. We had to skip on the recommended restaurants, as it would have been about 23 euro for just one item, and most Italian restaurants serve everything al a carte, so to have enough to eat that adds up fast. So we wandered until we found a little place off on a side street. I wouldn’t say it was particularly special, but they did offer an assortment plate of traditional Venetian cuisine which they guys ordered to split, Venetian cuisine consists mostly of seafood, and since I am allergic, I stuck with salad and pasta instead. Not only is the cuisine mostly seafood, it is marinated and pickled seafood. Bryce and Jake are always up to try new food, but Matt was a little hesitant. On the plate was fresh sardine covered with onions, bits of fish, and a creamy pate like concoction that they spread on rolls. 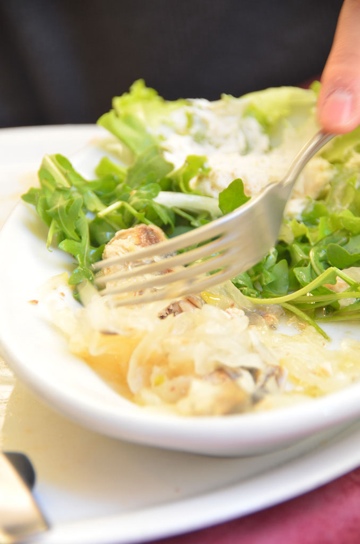 Our final visit was the Piazza San Marco. Here we planned to visit the church, the doge’s palace, and the Correr museum. 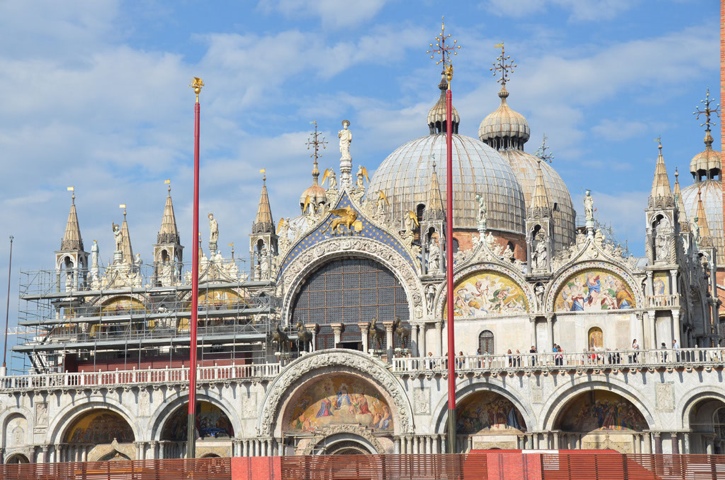 Bryce was very excited, because it was here, at St. Mark’s, that the Gabrielli brothers wrote antiphonal brass music designed for the choirs (like box seats or sections) on the second level of the church. But again we were disappointed with the no photo policy.

Both the palace and art museum are off the piazza. The piazza is a fun place, with a Disneyland like atmosphere. There are little bands that take turns playing at the various restaurants and people crowd in the middle and try to get get pictures with the pigeons. So we played along! A warning though…..if you sit at a restaurant in the piazza and order anything, even just a soda, plan on paying about 15 euros plus a sitting fee. Pop and Gwenn warned us so we were able to avoid this literal tourist “trap.” 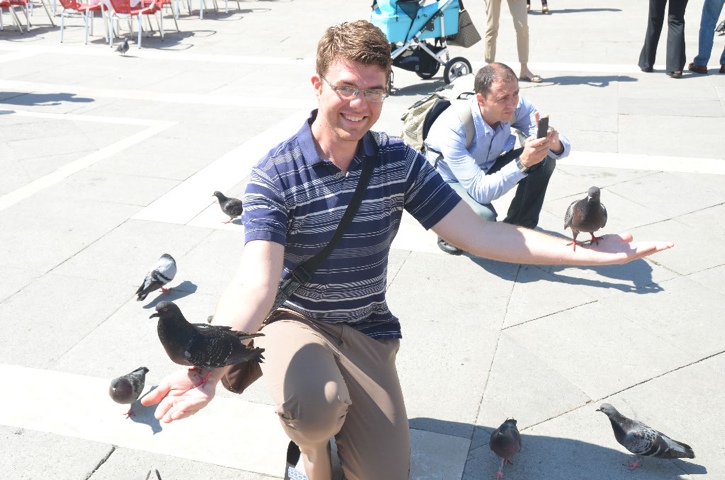 The Correr museum and the Doge’s palace are part of the main piazza. The Correr museum features Venetian art as well as artifacts that tell the story of Venice’s past. You can see historical maps, coins, and armor along with sculpture and paintings. Again, even though the streets and piazza we’re completely packed, the museum was quiet and not crowded at all. I would say this museum is worth a visit, but if you are limited on time I would start with the Doge’s palace.

The Doge was the elected official with great power, both symbolic and real, in Venice. His palace was a symbol of his power. The grandeur is amazing. It reminded me of Versailles, but on a smaller scale, of course. On your self guided tour, you will see opulent room followed by even more opulent rooms. There are meeting halls, council rooms, living quarters, secret passageways, and even a scary dungeon. In the grand hall you get to see the largest oil painting in the world, “The Last Judgment” by Tintoretto.

I thought Venice was just exquisite. A little touristy, but I would gladly battle the crowds that appear to be doing nothing other than clogging the streets to take in such a unique place. Seriously, none of the attractions were particularly busy. We did hit the piazza late in the day, which I thought turned out to be an excellent plan. The Doge’s palace can be busy, but we arrived about 90 minutes before closing time and it was cleared out, and we still had plenty of time to see the whole thing. We were also blessed with perfect weather. It was about 70 degrees and sunny. 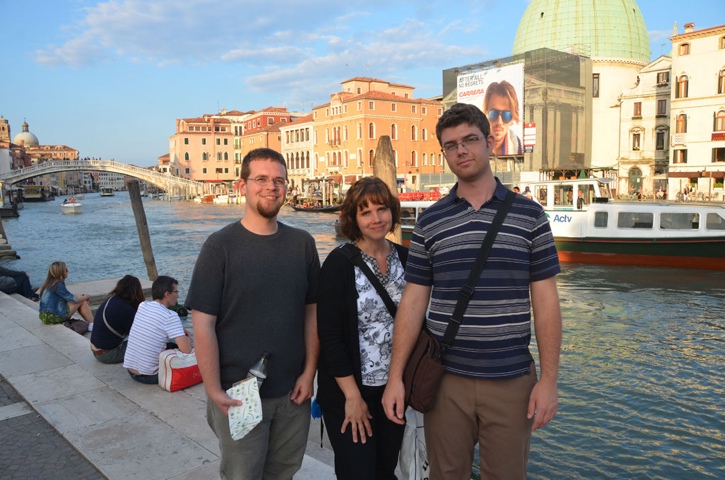 Maybe for our 30th anniversary we will go embrace the Romantic element of the city….a nighttime Gondola ride….a hotel right on the water….floating restaurants……yes. Bryce….make plans!

2 thoughts on “Venice: the city for Romantics”