Italy and the Walled City

We began out first day in Italy by visiting the old Medieval walled cities of San Gimignano (Gim in yahn oh) and Volterra. Both cities have so much character and have a sense of the ancient. That is one thing I feel in Europe that I have a harder time feeling in the United States. The US is so young in comparison. Some cities are old for us, like Boston, but for the most part so much of the US is from the modern era. So I love the sense of the ancient you can feel in Italy. As you walk the streets, it is not difficult to imagine people doing the same thing for hundreds and hundreds of years. I guess I am over imaginative, but I love the sense of weight that comes from the idea that I am just one minuscule part in the history of humanity.

These cities were perfect for engendering such feelings. Both cities have ancient roots, having been established by the Etruscans long before the birth of Christ. San Gimignano was established in the 3rd Century BC while Volterra has Neolithic roots which reach even farther back than the Etruscans, who were also a part of Volterra’s past.

To get to both cities it was necessary for us to drive through the Tuscan countryside. What beauty! The countryside is many shades of green dotted with wildflowers, especially the bright red poppy. In one field I counted at least four different bright colors from flowers. The roads yield to the landscape, rather than the other way around, and curves around the hills and small villages along the way. Most of the villages pop up on the hill tops, adding to the picturesque natural landscape. It seems most large villas come with grape vineyards and olive trees. Seeing the countryside makes me yearn for a simpler life, away from the hustle and bustle of what typifies my everyday reality.

San Gimignano was our first stop. We had to park on the outskirts of the wall and walk up. As the town is quite small, this was not a problem. We wanted to visit the two churches in the city, as well as locate a highly recommended gelato shop. Yes, we know our priorities! The first church we visited is called Sant’ Augustino. It is a mid-sized 13th C. church, with a treasure of frescoes behind the alter in the apse. The frescoes detail the life of St. Augustine and are by the artist Benozzo Gozzoli, painted between 1463 and 1467. They are in remarkable shape and go from mid-wall to the high ceiling. We were not allowed to take pictures inside, but here is a picture I found on the Internet. 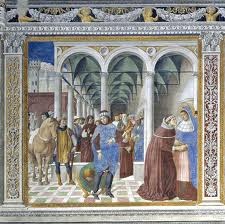 Next we visited the large church, called the Collegiata. This church is one of the most densely frescoed churches in Italy. We purchased a small guide and had a lovely time interpreting the scripture stories along the walls. The stories were told chronologically in three different segments on each wall, and to continue chronologically you walk back and forth following the zig zag pattern. On one side the frescoes tell many stories of the Old Testament, like Noah and Job. On the other side the birth, life, death, atonement, and resurrection of Christ are detailed. The Old Testament scenes were painted by Bartolo di Fredi and the New Testament scenes are attributed to Barna da Siena, but may have also been Lippi Memmi. Like many churches, the outside does not really give an indication of the splendor inside.

Again, we were not permitted to take pictures inside, but here is a photo I was able to locate. 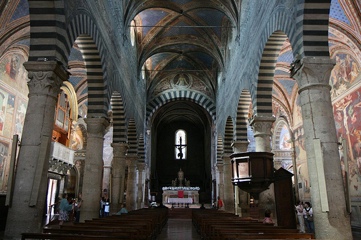 And, in keeping with the ultimate goal of the trip, we were able to locate an incredible gelato shop off the main piazza. Between us all we sampled many flavors….such as lavender, grapefruit champagne, pistachio, and spicy cream. Gelato is amazing! It is the equivalent of premium ice cream, yet manages to be lighter. Delicious!

Our next stop was lunch. We had been given a recommendation to a small trattoria on the way from San Gimignano and Volterra. We took a side road to a place called Mazzola, with a restaurant called Trattoria Albana. We were treated there so well, and the food was delicious. It tasted like homemade fare. My brother Matthew wanted to try pigeon, but the owner, in broken English, encouraged him to try pheasant, since he was probably not used to the tiny bones of the pigeon. So Matthew ordered pheasant, but then our generous host brought an order of pigeon for them to try, on the house! Between us we had rabbit, pigeon, pheasant, and guinea fowl. I had ravioli stuffed with guinea fowl, cheese, and almonds, with a rich butter based sauce. We were seated in the back room, and had the area totally to ourselves.

I did have one small adventure while at the trattoria. I used the restroom, soaped up my hands, and then was stuck for a few minutes because I could not see any way to turn on the water. Turns out there is a foot pedal. Who knew!

We then continued our journey to Volterra, which was just down the road. We got a few snickers out of the name, as Stephanie Meyer references Volterra in her Twilight books as the capital of the vampire world. In fact, her books were prominently displayed in several of the gift shops.

Volterra has Neolithic, Etruscan, Roman, and Christian roots. It is also known for the mining of alabaster, which the people of Volterra have been doing for centuries. We headed immediately to the archeological museum to see the Etrruscan collection, one of the most extensive collections of Etruscan artifacts. We spent about an hour there. Overall I was disappointed, since there was very little explanation of the collection in English, and not much was done to educate the viewer on Etruscan society. But it was interesting to examine the large collection of funerary urns. The deceased was depicted in a stereotypical way on the top, with their ashes stored inside. On the box there was often a depiction of the journey to the afterlife. Here is a typical example. 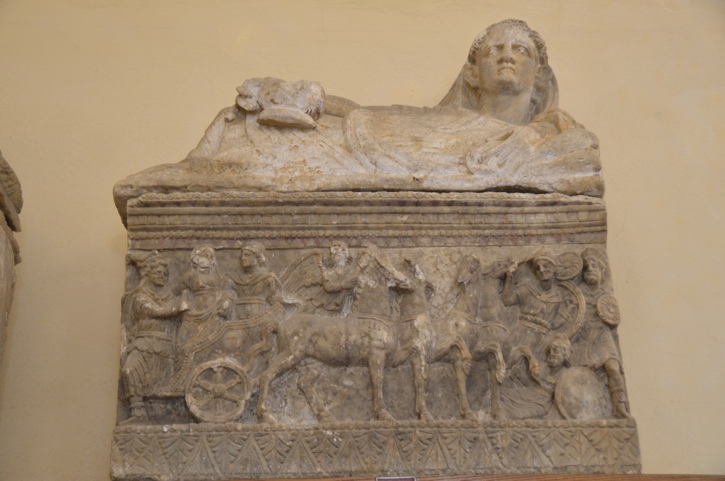 We finished out visit to Volterra by stopping to view the remnants of a Roman theater. It was incredible to see yet another aspect of this city’s unique heritage. These ruins are from the first century, BC. 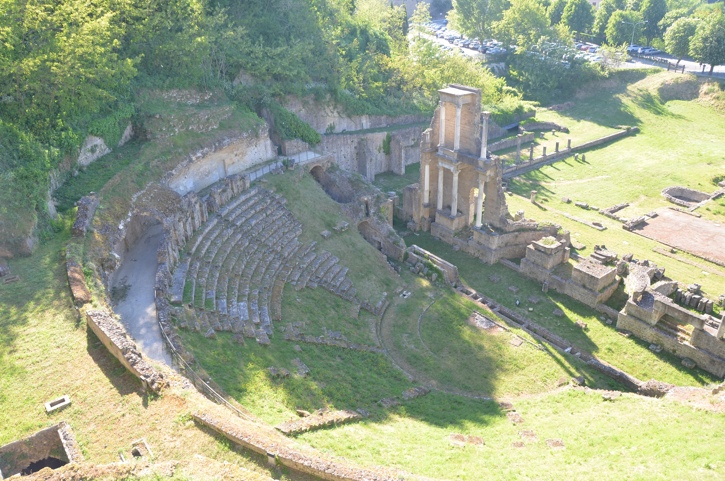 To finish our trip, we visited an Alabaster store for just a few minutes. Then back to our villa for dinner! I would say that is was a perfect first day in Italy. A beautiful view, great company, delicious food, art, and history. All in one day! 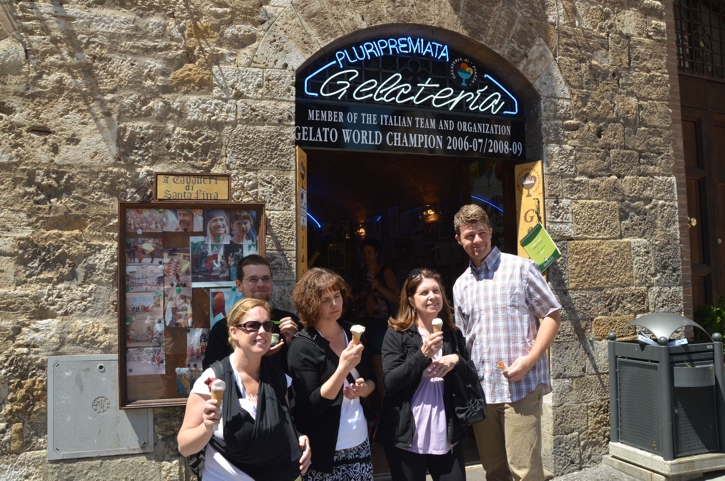 Yes, I am the one who looks like a dork in this picture. Oh well. Gelato rules!

2 thoughts on “Italy and the Walled City”